It’s hard to see something you are not looking for.

Life in the Kingdom is really about learning to live life continually aware of God’s presence. Every believer should practice awareness and practice noticing the unnoticeable; then respond. I’m glad God has graciously been training, me, given me the eyes to see, and a heart that seeks to understand. I’m working on responding acting on what I see, or sense.

“You have no idea how much I needed this today. Thank you.”

This past summer, Pattie and I headed out to the Fraze, an open-air amphitheater near our home, for Blues Fest. Some great bands were playing and we were enjoying the time together. When we arrived we decided to buy some BBQ. We checked every vendor to see what they were serving and finally came to the last booth. As I walked up I noticed the lady serving. I suddenly had an impression I should encourage her. Specifically I should tell her, “Your future is going to be greater than your past.” As I was pondering just how to navigate and communicate the impression I noticed she had a few tattoos. Then I noticed she was wearing an arrest monitor on her ankle. The impression now made sense.

I payed for my food and then said, “You might think this strange but sometimes Jesus gives me encouraging words for people. I have an encouraging word for you. Your future is going to be greater than your past.”

I gently held her arm as I spoke and continued speaking to her about her life. I spoke into her destiny. I told her how Jesus could change her life and wash away her past and propel her into her future. I then invited the Holy Spirit to come and touch her life.
She looked up at me and said, “You are making me cry.”
I replied, “Jesus is here.” I then briefly told her how I was a heavy drug user 35 years ago and Jesus had changed my life.

She paused and stated, “You have no idea how much I needed this today. Thank you.”

We grabbed our BBQ, moved past the growing line behind us and walked to a patio to eat. Pattie asked me to explain how I knew what to say and the process of it all. It’s not rocket science but it does take practice, and a willingness to respond and to experiment.

Here is what I told her.
I practice noticing and attempt to live life from a being aware perspective.
I seek to notice what’s going on around me and I seek to be aware of what’s happening from a heaven to earth perspective. I am the earth where His will wants to be done.
Often when speaking to groups of believers I ask them to place a hand on their heart and to pray, “Your kingdom come, Your will be done as in heaven, in this earth.” At the end of declaring the prayer I then ask them to pat their chest and say, “This earth.” We are the earth where the Kingdom comes from heaven to us…earth. 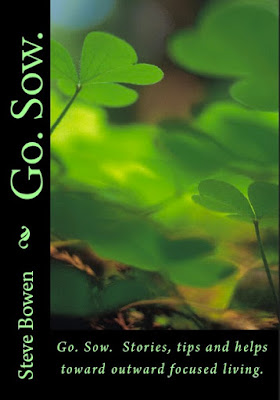 Len Sweet once said, ‘the most at risk
leadership skill is inspired imagination.’

Inspired imagination begins with the end in mind. Thinking ‘What would our community, church look like if?‘

Their inspired imagination continues to this day. Their creative spark is spreading the good news, demonstrated in practical ways, all over their city and into the world.

True community is formed when people choose to live life on mission, and begin to actively give themselves to pursue their vision…together.

Community is living life forward, moving toward a common purpose.

Philippians 2 Message. Think of yourselves the way Christ Jesus thought of himself.
If you’ve gotten anything at all out of following Christ, if his love has made any difference in your life, if being in a community of the Spirit means anything to you, if you have a heart, if you care— then do me a favor:
Agree with each other, love each other, be deep-spirited friends.
Don’t push your way to the front; don’t sweet-talk your way to the top.
Put yourself aside, and help others get ahead.
Don’t be obsessed with getting your own advantage.
Forget yourselves long enough to lend a helping hand.
Think of yourselves the way Christ Jesus thought of himself.
He had equal status with God but didn’t think so much of himself that he had to cling to the advantages of that status no matter what. Not at all.
When the time came, he set aside the privileges of deity and took on the status of a slave, became human! Having become human, he stayed human.
It was an incredibly humbling process.
He didn’t claim special privileges.
Instead, he lived a selfless, obedient life and then died a selfless, obedient death—and the worst kind of death at that—a crucifixion.
Because of that obedience, God lifted him high and honored him far beyond anyone or anything, ever, so that all created beings in heaven and on earth—even those long ago dead and buried—will bow in worship before this Jesus Christ, and call out in praise that he is the Master of all, to the glorious honor of God the Father.

Perhaps, it is a group of friends who are consistently thinking, ‘How can we help people within our sphere of influence take their next step toward Jesus Christ?’

Five friends…
We don’t know much about them. They were friends. Four of them were healthy, one wasn’t.

He was bed ridden, needed healing.
Five friends heard about Jesus.
They heard he was healing the sick, performing miracles, and He was teaching how to live life within the Kingdom of God.

We don’t know how far they had to carry their friend, we just know that they were intent, focused on one purpose… to bring their friend to Jesus no matter the cost.

Five friends decided to move toward Jesus… together.

Someone had to find the directions to the house.

Someone had the foresight to bring ropes… just in case.

When they arrived they noticed the crowd was huge. Many people were pressing in to hear the words of Jesus. At some point they realized they couldn’t gain access.

They formed a new plan. The roof.

They pressed through the crowd and found a way to the roof. Determined, they parted the roof, tied ropes to their fiends mat and cautiously lowered him to the floor.

Their friend was healed.

The principle: True community is formed when people are determined to move toward their common purpose… together… envisioned, on mission.